When Elizabeth addressed the nation last year as is tradition for the season, she spoke on the theme of reconciliation, and in so doing she specifically mentioned that Jesus Christ was her inspiration and the anchor for her life. Adorned with baubles, bangles and bright shiny beads, Elizabeth, in show-casing her conifers to the world at large as she does each year, also reminded the nation yet again that the 25th December is the celebrated day of Jesus’ birth, over two thousand years ago.

That’s perfectly true of course. It is the day in which it is celebrated, despite an irreconcilable difference between the “celebrated” date and Jesus’ actual Spring birth in Bethlehem. How easy it is for Elizabeth and others like her, to set aside such anomalies in the face of contrary evidence. Such a position is in-congruent. So much for reconciliation.

That aside, amidst a backdrop awash with red poppies, Elizabeth goes on a silent ramble at Windsor Castle. In referring to the 1914 War in which “Silent Night” broke out between the two entrenched opposing sides, she pondered over the truce of all truces and reflected on those, who have also made similar sacrifices, while supporting some right royal conflicts under the guise of service to queen and country. With her millions of lackeys very much in mind, the film below is released prior to her scheduled recurring hypocritical showcase for 2015.

This review gently probes her assertion that Jesus Christ is her influence and anchor, when she is doing the OPPOSITE of His teaching and actually fighting against Him, preventing Him from taking His Rightful Throne – the British Throne that she fraudulently sits upon. It is done with parody and music and in the hope that she and a few of her royal subjects might actually watch it and take heed of the messages within.

A close examination of the queen’s underlying Yuletide message, seen from the vantage point of how Christ might view it, when tested against God’s Law, is the film’s overarching objective. Jesus Christ is, after all, the source of her inspiration, or so we are told. That is some statement from her.

Will she be willing and able to walk her talk though?

For instance, would Elizabeth freely give up her throne and all her riches, if and when, Christ asks her to do so?

Or would she instead, try and hold the fort and argue that surely Christ would never ask such a thing of her? Does that brush-off sound familiar? 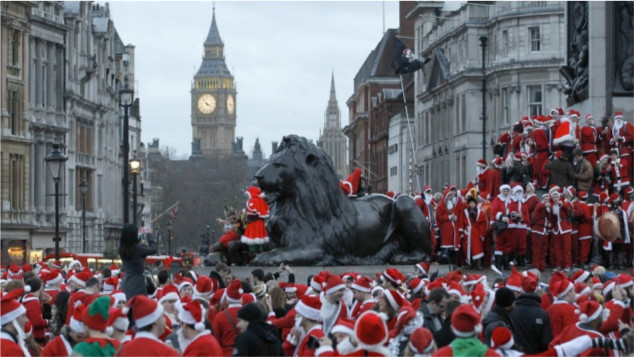 Many of the queen’s reconciliatory musings are noteworthy and merit deeper scrutiny, not so much because of anything insightful she may utter, but rather, because of what she omits to say. For instance, predictably absent from her speech last year, was any mention of the bombs that her government would subsequently unleash on their foreign neighbours from afar. No poppies for dead Libyans and Syrians, I bet!

Leave her, loathe her, or love her, Elizabeth Alexandra Mary Battenburg, seems to rather like playing out her part in these end-times, as each successive year she jingle-jangles her way onto Santa’s sleigh and into Satan’s lap.

The next question is this: when it boils down to things that matter to Christ; how many of us are just like Elizabeth is, enacting out our own little game of thrones, while refusing to listen to His still small voice of calm?

How old were you when you first found out Santa was a lie?

For those who have just watched “Reconciling Santa”, a refreshingly honest and amusing talk about how a “Santa Claus” experience impacts negatively on a society’s propensity to follow truth or not. For sure the lie of Santa Claus cannot be reconciled with Christ’s teachings, and this short talk about Santa by Yusef Estes helps explain why, from a non-Christian perspective.

A Time to Think: Here comes santa, run like hell.