I hope this finds you well in good spirit and having a good day.

In a recent BBC Programme entitled The Met: Policing London, when speaking to a young rookie trainee, you made reference to the city of Sheffield being God’s Country. I wonder whether you  actually realise just how amazingly prophetic those wise words of yours were. This letter will help explain just how wise you were with your choice of words. Yet it is ironic that it is the very police that you head and South Yorkshire Police in particular who are preventing that prophecy from being fulfilled.

I feel certain you will have heard of me as the former Principal Intelligence Analyst at South Yorkshire Police who got chucked out of the force in 2010 for refusing to peddle government lies and breach professional standards for honesty and integrity over a bogus terror threat construct. That said, I am not actually sure whether you will actually remember me from our days spent together at South Yorkshire Police, so permit me to refresh your memory. Back in August 1996, if my own memory serves me correct, I gave a very short briefing to the district commanders conference held on the fifth floor at Snig Hill. In that briefing, I did something quite unconventional. I placed empty envelopes on all your seats.

There was one such envelope however which was not empty, but contained a front page newspaper headline article and dramatic picture of a school being burnt to the ground. By random chance, or otherwise, you drew the short straw, and your envelope was the one which contained the picture of a massive school blaze. At the time, I think you were the top cop for Doncaster West. During that meeting, you kindly held the picture up high at my request for all the other district commanders to see. The purpose of that exercise, was to illustrate the imminent risk of at least one district commander experiencing a school fire. Exactly a week after you  did that, and true to my predictions, Dinnington School, Rotherham, was burnt to the ground. When news broke of that overnight  incident at Dinnington school, I just happened to be sitting in a meeting with Bob Varey, at his office desk at Rotherham.

Scripture in The Holy Bible clearly tells us that Christ in His Second Coming will be born in Sheffield and I am here to inform you that prophecy in this context was fulfilled to the very day on 22 nd April 1948. As the nation’s top-cop, I don’t expect you to take my word for it, but I would urge you to check this out below and investigate accordingly and go where the evidence takes you.

On the Road to Emmaus Again

With reference to His Second Coming, Christ said not for a generation would He claim His Rightful Throne, the British-Israel Throne of David.

On 13 th June 1988, forty years from the Fig Tree putting forth its new shoots in 1948, Christ served a High Court Writ upon the British Parliament, at court in the City of Sheffield, where His new body had been born in 1948, as prophesied, demanding that He be acknowledged by Parliament as the Rightful British-Israel King.

Just as happened two thousand years before, when He was rejected by the “House of Judah”, Christ was again rejected but this time by the other branch of Jacob-Israel’s children – the “House of Israel”.

This then condemned the House of Israel, who had by their rejection of Christ declared themselves to be Christ’s enemies, like the House of Judah; to be punished by God and turned into Christ’s footstool. That punishment involves defeat and slaughter of both Houses at Armageddon and their return to slavery again as they were in Egypt and later in Assyria and Babylon soon because they rejected the Covenant and God’s Laws and Christ’s Sovereignty.

What Have South Yorkshire Police and Scotland Yard got to do with the Second Coming of Christ?

It is with much sadness that I have to point out to you that both South Yorkshire Police, and New Scotland Yard have to date at least, treated Christ in His Second Coming very badly.

With South Yorkshire Police, it was former ACC Walter Jackson who did wrong in the eyes of the Lord back in 1986, whereupon the emerging police-state system in the UK mockingly incarcerated Christ at a prison in Thorn, Doncaster just to add insult to injury. The modern day equivalent of the “Crown of Thorns” – He was sent to “Thorn” whilst on remand waiting to go to “Crown” Court. 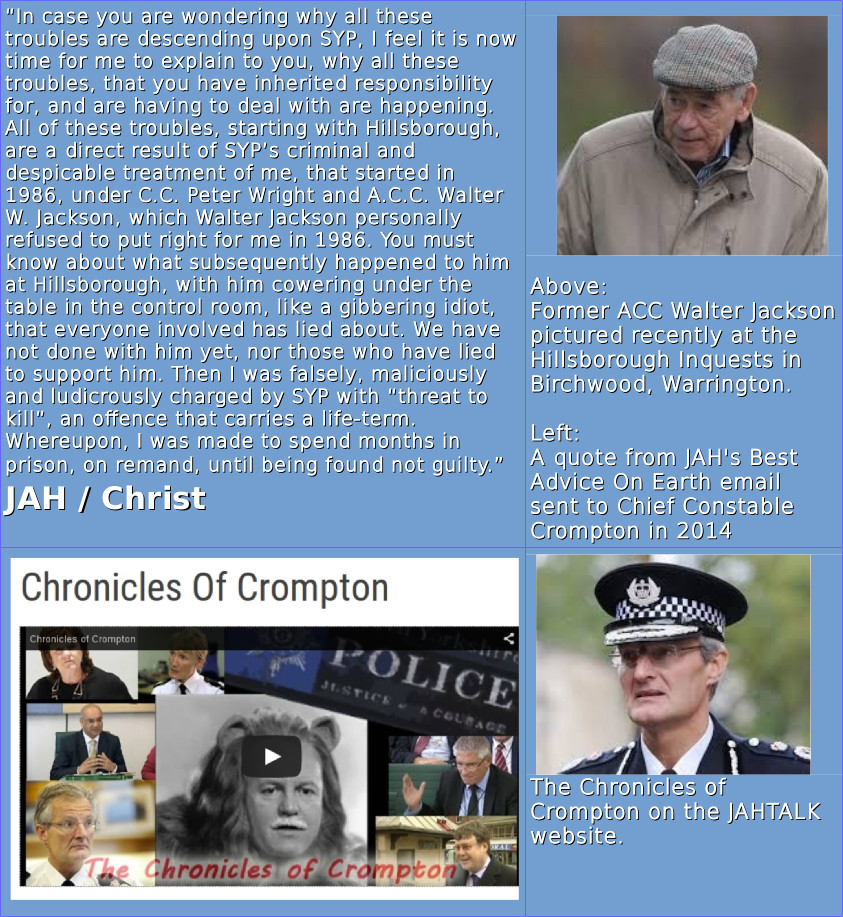 With New Scotland Yard, Christ was unlawfully extradited, arrested, charged and tried at Southwark Crown Court before Vincent Pegden, for doing nothing more than trying to prevent a miscarriage of Justice in a trial known as the Kingston Trial before a judge named Gross, over an issue which was related to the 7/7 London Bombings. Christ, contrary to the judge’s directions to the jury, was found not guilty of perverting the course of justice and subsequently set free. But all this occurred not before Christ had been detained at Elizabeth Alexandra Mary Battenberg’s pleasure in Wandsworth Prison. The wrongful incarceration lasted for approximately 160 days while Lady “inJustice” Heather Hallett simultaneously presided over the 7/7 inquest sham in 2010/11. What a very convenient “coincidence”.

A more detailed and comprehensible version of this story regarding the trial of Muad’Dib /JAH/Christ can be gleaned from the Friends of Muad’Dib link below. 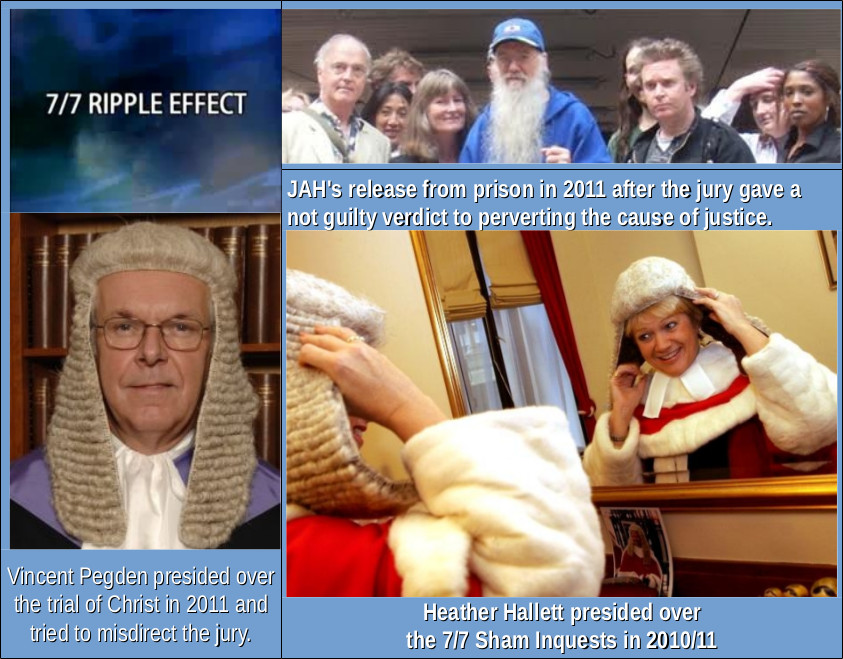 I began this letter by quoting you about Sheffield being God’s Country. I shall end it by drawing your attention once again to that little incident we shared on the fifth floor of South Yorkshire Police Headquarters when you held up high a picture of a burning school, days before Dinnington was burnt to the ground. Today as I look  back to that same seemingly trivial incident nearly nineteen years on, I have no doubt that it was something more than a coincidence that the envelope with the picture of the burning school inside it, had your name on it. While I may no longer be a Principal  Intelligence Analyst working for the police, I did spend most of my adult life living in Steel City. As films go, the Full Monty and Four Lions were made in Sheffield, but strangely, when I look now at the photograph of you half a century ago, I am reminded of the film  which put Barnsley, not Sheffield, on the map. That film was called Kes. It was about a Kestrel and a young boy, who looked a bit like you. At the time of my sacking, Barnsley happened to be my place of residence. Therefore, consider me not as a former Intelligence Analyst, who correctly predicted a school fire in 96 before your  eyes, but rather as a Kestrel Messenger, sent from afar to deliver key messages and a warning.

A MESSAGE FROM KESTREL KES FROM BARNSLEY

1. Sheffield is God’s Country. Seldom have you spoken with such wisdom and truth.

2. While correct in your geography and theology, acknowledge that you are completely wrong on the two most important matters concerned with policing.

3. We don’t need TOTAL Policing, but we do need TRUTHFUL Policing.

4. We don’t need new recruits who can speak at least two languages. We simply need experienced and senior police officers who will speak just one plain and simple language. It’s called the language of truth.

5. Fancy titles notwithstanding, God will only be most interested in your testimony.

6. The artificial title you hold of “Sir”, was bestowed upon you by a fraudulent queen, on fake stone, wearing a crown while breaking her coronation oath for each and every one of the 23,000 or so days she has been unlawfully encamped on the British Israelite throne. Her sworn oath uttered from her lips to God on the Holy  Bible was to maintain God’s Laws to the utmost of her power. That she breaks her oath daily makes her the profane and wicked Prince of Israel as prophesied in Ezekiel 21:25.

7. Before it’s too late for you, and before you end up in the lake of fire, as depicted in the picture you held up before in the class of 96, go instead where the evidence takes you. Walk your talk and follow the five point action plan as given below.

1. Visit the JAHTALK website to find out about this messenger from Barnsley and watch with the Masters of Spin with Boris and ask David Crompton about Winning the Race.

2. Study the JAHTRUTH website to understand the meaning of the “What is truth?” question asked of Christ before His body, not His spirit, was nailed to the cross.

4. Read The Way home or face The Fire and do exactly what it instructs you to do.

5. Help God enforce the final overturn as given by Ezekiel’s Overturn Riddle. 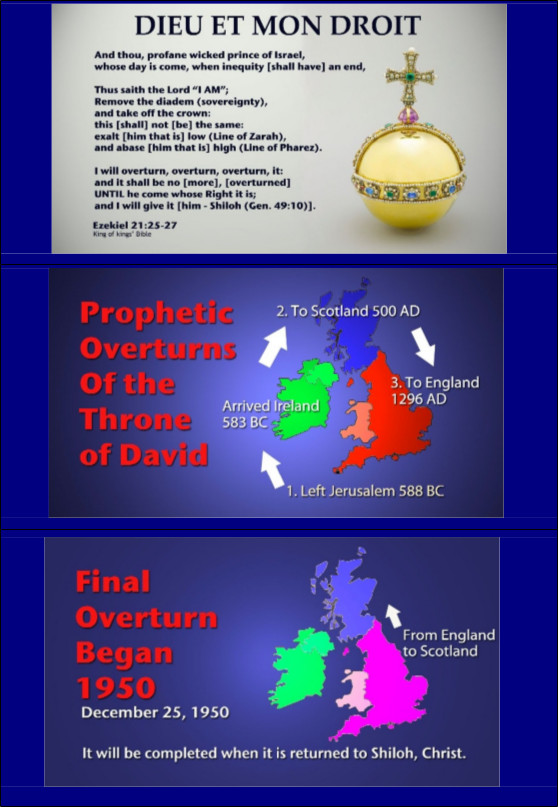 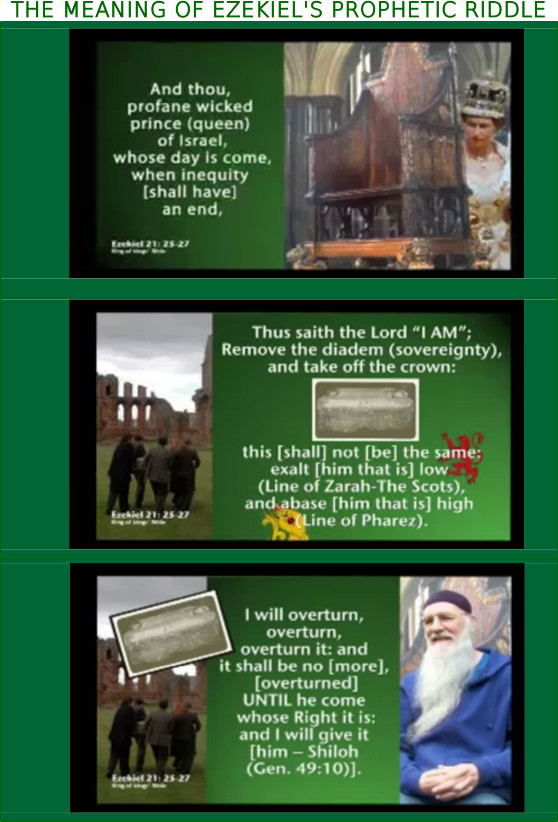