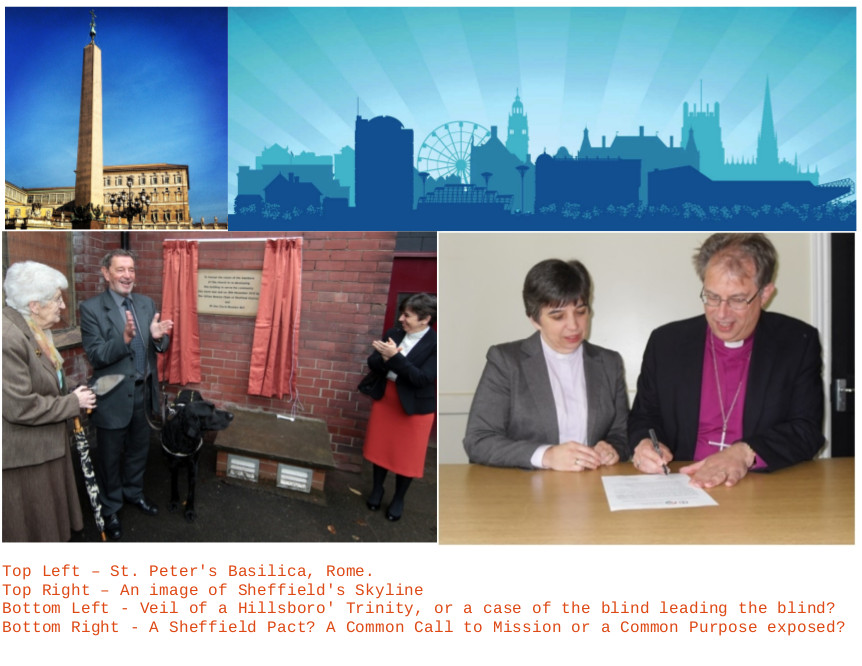 AN OPEN LETTER TO THE CHAIR OF SHEFFIELD METHODIST DISTRICT

Good morning and good wishes to you.

Not so very long ago, I was present in the congregation when you jointly led a service with Mick Neal at Staincross Methodist church, shortly after your appointment to the position of chair of the Sheffield Methodist District.

My attention has also been recently drawn to two relatively recent photographs of you. This first is from the Sheffield Star in which you feature with David Blunkett unveiling a plaque commemorating the fact that the Sheffield District spent ONE HUNDRED THOUSAND POUNDS on the refurbishment of the “Hillsborough Holy Trinity” Church. The second photograph is where you appear signing a Sheffield Pact with a man titled the Bishop of Sheffield, the Rt Revd Dr Steven Croft wearing your respective badges in the form of Roman clerical dog collars.

Your predecessor Vernon Marsh, once granted me a meeting alongside Revd Jon Bellfield over a work related issue concerned with not breaking the ninth commandment. At the time, I had just been dismissed as the long-standing Principal Intelligence Analyst for South Yorkshire Police. My dismissal was for refusing to peddle government lies for and on behalf of the Chief Constable in my threat assessment assignment back in 2010. I would not make a false statement concerning the bogus terror threat. My subsequent well-documented employment tribunal case became a subject of interest in alternative news media circles across the internet in UK, Ireland, USA and even in some countries in the Middle East.

Having recently read your published profile on the Sheffield Methodist District website, and noting that you spent a part of your early life in Cornwall and Somerset, I wondered whether you had ever taken seriously the notion that two thousand years ago, Jesus spent a good part of His missing years in Glastonbury, England along with His mother and Great Uncle Joseph of Arimathea.

As with the government’s entirely false and fabricated narrative on events like 9-11 and the 7-7 London Bombings, the churches’ own narrative on the birth of early Christianity is actually just as polarised from the real truth of what happened. Why on earth would God bless a church or a nation which remains so hell-bent on covering-up the truth, I ask myself, given compelling evidence exists to the contrary. Over these issues of monumental global importance, the clergy and most modern day Christians from our once great nation, show at best wilful blindness to the truth, or at worst complicity with the cunning “Churchianity” plan. God will not be mocked though.

With my analytical hat on, I find the evidence that Jesus came to England as part of His Great Commission utterly compelling. Likewise, I find the evidence that the Old Testament Prophet Jeremiah journeyed to Ireland in 583 B.C. along with king Zedekiah’s daughter, Teia Tephi, Jacob’s Pillar and The Ark of the Covenant, equally convincing. When it comes to citizens of Great Britain, Ireland and America, our real identity, as the true “Israelites” has been carefully covered-up from the sheeple, just like the truth has been concealed about the identity of the real perpetrators of the terrorist attacks such as 9/11 and 7/7.

I invite you now to click on the link below and watch the two films entitled “Jerusalem” and “Tara, Tara, Tara”, so that you can start to familiarise yourself with what is at stake here. 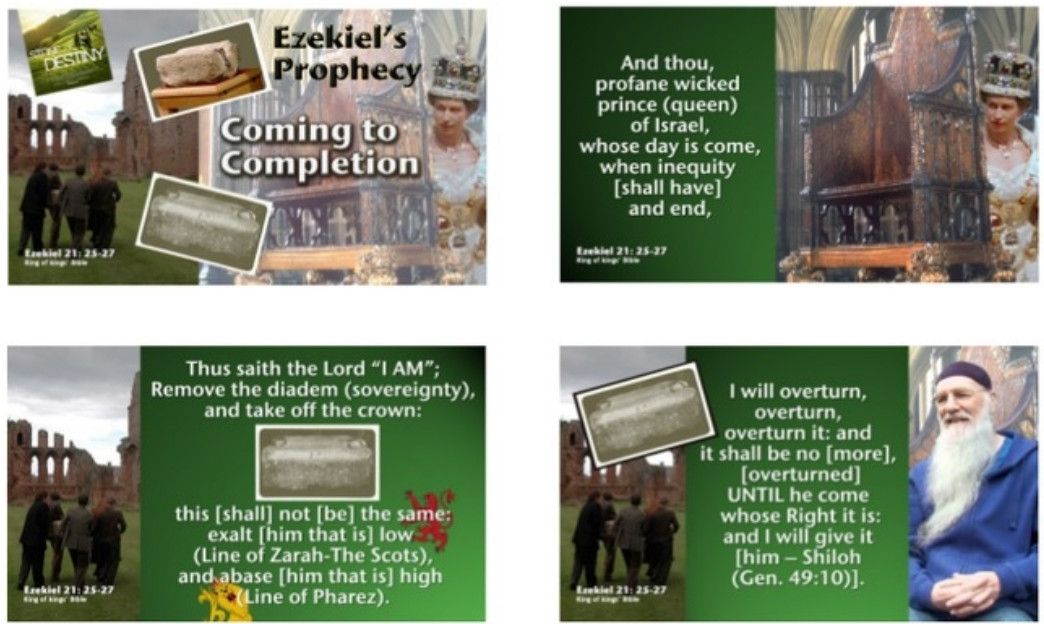 The reason why I am telling you all of this, is because you, in your position of seniority in the Sheffield Methodist District, can become a force for considerable influence for good. By the same token, if you choose to ignore this message, you will instead become a force for evil. If you have already taken some time out to read my previous email and in particular the article contained within, entitled “On the Way to Emmaus Again”, doubtless you will have noted the mention of the Biblical strategic importance of the city of Sheffield, as explained in JAH’s all important article and by His reference to Genesis 37:3-8 and Genesis 49.

I feel certain that this email and its contents, together with my previous email to you, ought to severely test whether your allegiance is to God or whether it is to a Methodist brand of “Churchianity”. The two things are not synonymous.

CHURCHES TOGETHER OR IS CHRIST DIVIDED?

In January 2014, after attending a Churches Together service in Barnsley held at Emmanuel Methodist Church on a “Christ Divided” theme based on 1 Corinthians 1:10-18, I witnessed Methodist Ministers praying and actually leading their congregations to ask God to help build Satan’s counterfeit one world kingdom (UNO/NWO) that God has sworn to destroy, as is explained in the “A TIME TO THINK” article by Hannah Michaels and the article entitled “One World Religion – The Destruction of Christianity – by Christians” by Lorraine Day.

The Destruction of Christianity – by Christians

Finally, I want to make just a few other observations, regarding my time spent as a Methodist Church member in both Sheffield and Barnsley. During my time in Barnsley, as both a senior church steward and a member of the Barnsley Gideons, I had cause to attend many different Methodist Churches and met with a number of Ministers and Lay Preachers.

One of the things that I found somewhat disconcerting was the tell-tale signs of church infiltration by Jesuit and Freemasonic influence. For instance, on several occasions, the “Ad maiorem Dei gloriam”, that is the emblem of the Jesuits, was visibly on display in prominent places in some of your Methodist church buildings. Ordained Ministers were also known to be Freemasons and I pondered on how that could be so.

My meeting in 2010/11 with your predecessor Vernon Marsh was made all the more memorable, because of the flippant and condescending way in which Vernon Marsh, as the then leader of the Methodist Church in Sheffield, treated a non-trivial issue concerned with global truth.

Several other Methodist Ministers have been equally ill-at-ease when confronted with such truth. As a church steward at Birdwell, I became alarmed to witness that the main visual image displayed in the church sanctuary was of a rather sinister looking banner featuring the obscene satanic phallic image of the Birdwell Obelisk. Yet my concerns expressed about this fell on deaf ears. 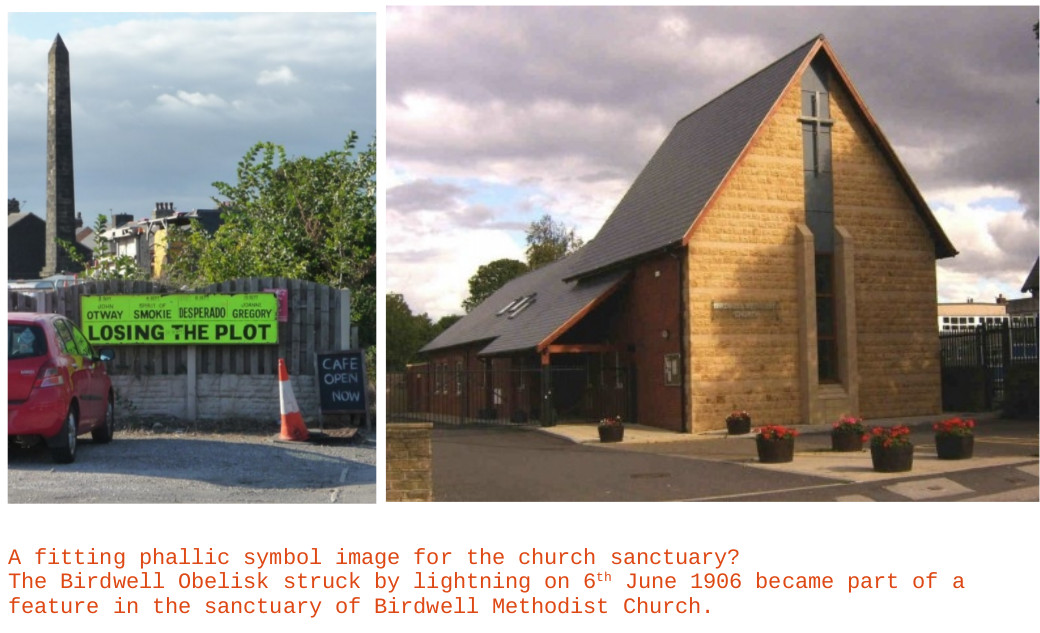 Further afield, in Hexthorpe Methodist Church, Doncaster, I once had an opportunity to attend an event where Dr.Patrick Sookhdeo happened to be the key note speaker on a subject I know a fair bit about.

As I sat listening to the utterances of this planted pastor from the Anti-Terrorist Unit, and as someone who had researched and seen through the terror threat and found it to be entirely bogus, I challenged this stooge and puppet Dr. Patrick Sookhdeo over his own propaganda role and his ongoing support for the wicked and shameful western government narratives of 9/11 and 7/7. The utterly brainwashed Methodist congregation from Hexthorpe, could do nothing more than scoff and laugh at my genuine question, in a vain attempt to protect their spin doctor’s deceitful position. This so-called “Christian” pastor was on the day the emperor with no clothes, poisoning the minds of gullible Christians with his fear-mongering antics, and his very own brand of eloquent lying lips and risible racist rhetoric. 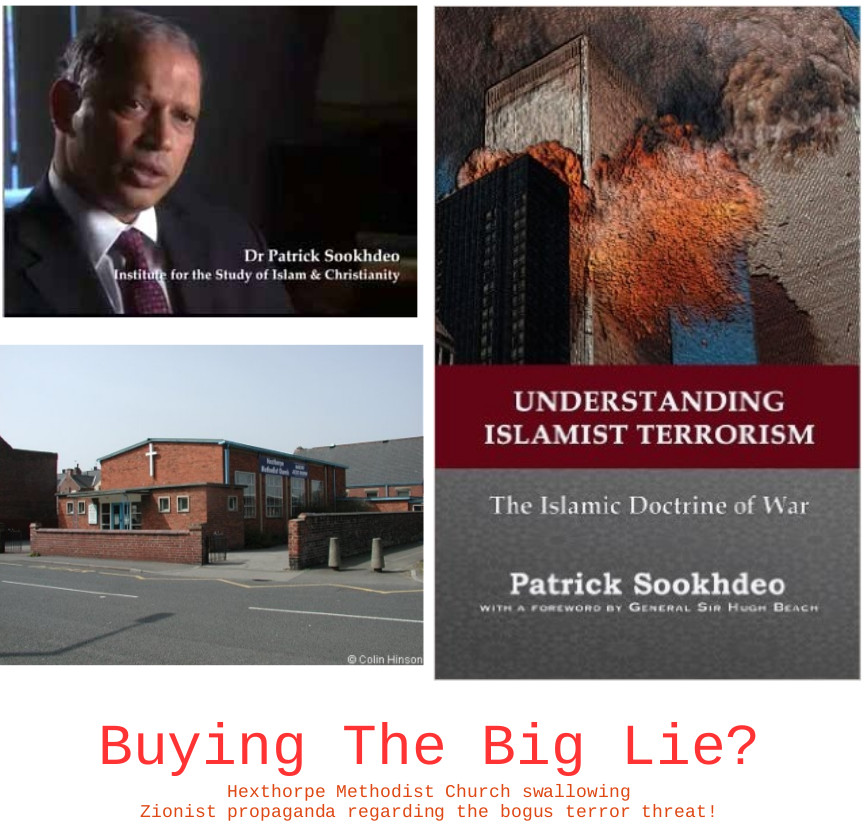 There are many people in the flocks of the Methodist and Christian churches who are led astray by a satanic priesthood. These followers are often well meaning and think that they want to know Jesus, but because of the erroneous teachings and practices of Christian churches, they understand not their real British Jacob/Israelite identity and the key messages in Scripture about JAH, the Second Coming of Christ.

In view of the fact that not a single Methodist Minister attempted to rebut the veracity of the “ON THE ROAD TO EMMAUS AGAIN” article, and it was sent to about one hundred of you, and after seeking counsel from JAH Himself, who is the Second Coming of Christ, I have decided to place this email to you in the public domain.

Furthermore, I have also copied the Barnsley Superintendent Methodist Minister Mick Neal and a select few others such as David Blunkett and Dr. Reverend Alan Billings into this email. 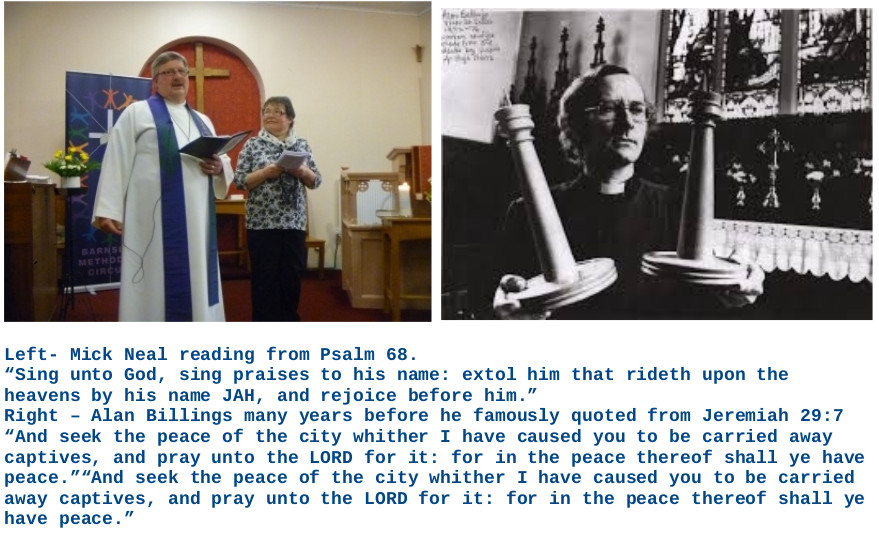 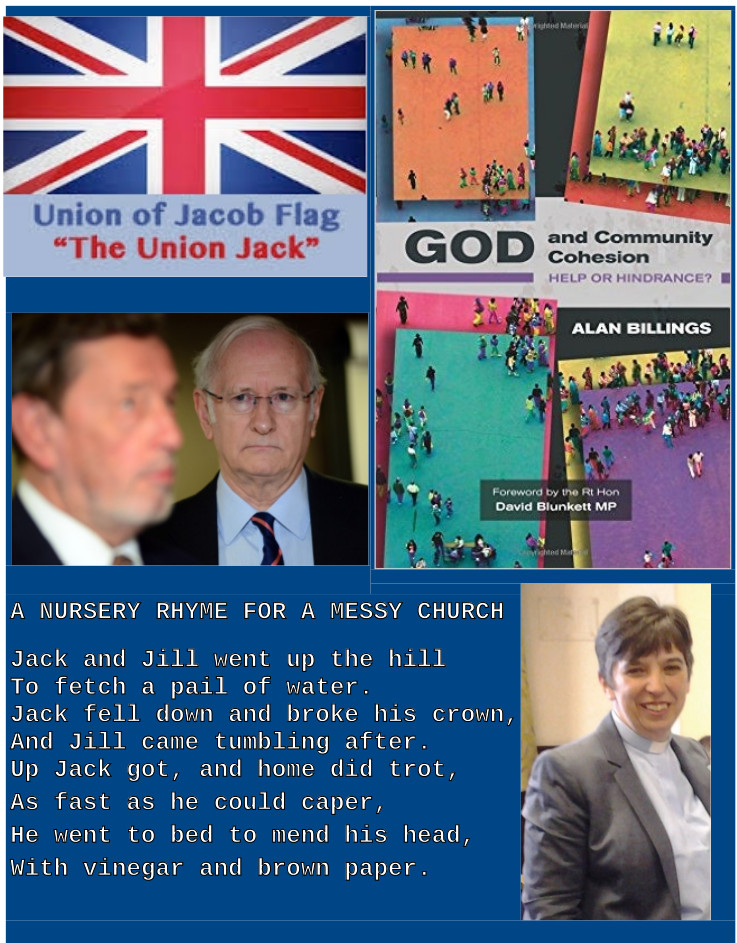