From Speke to Malta

In a week when Archbishop Carlo Maria Viganò released his third letter calling for the resignation of Pope Francis, and in a month when a principled catholic priest named David Marsden wrote an open letter to the UK Bishops, please treat this, my third letter, as a call for the renunciation of the Bishop of Gibraltar’s Marian idolatry, in favour of a real encounter with Christ, in the here and now in His Second Coming. Please recall the very first thing I told you, when I first met you during communion during a Saturday morning service in the cathedral.

“Christ is already here in His Second Coming!”

Before you now stands a wonderful opportunity to take a step closer to a close encounter with Christ by responding positively to this request from an actual disciple of Christ in His Second Coming. Today’s letter of mine is formulated with the full approval of Christ Himself.  It is done so in the prayerful hope that you will respond favourably, and at the third time of asking, kindly grant me my request.

If my first letter featured Gibraltar, and my second featured Rome, this my third letter features England.  It does so, as I am particularly mindful of two associated simultaneously occurring events over this weekend, both of which bear the hallmarks of your very own fingerprints.

Event one in question concerns a special annual celebration mass from Our Lady of Delours in Fulham and Chelsea.  It involves your Gibraltar Day celebration. I hope by the way that you had a good journey to a location with which I am familiar.

Event two concerns a Bishop of Gibraltar’s sponsored RETREAT on The Rock, headlined 20/20 Vision Mission, as promoted in October’s edition of Upon This Rock, and as aided by a Missionary of Mercy priest and Spiritual Director from England’s finest sodomite catholic seminary – New Oscott.

Unsurprisingly, I was not present at this weekend’s personal preparation RETREAT, but  if the New Oscott connections have not yet clicked into place, please reread David Marsden’s open letter to the UK Bishops.

In one of your own recent letters, which just so happened to be picked up for the first time in the cathedral yesterday, it was noteworthy for me that your letter wording began as follows:

“Dear brothers and sisters in Christ”.

Furthermore it was even more striking that you ended your letter with the following words:

“… of a wonderful opportunity to recall Gibraltar to its Catholic faith through a fresh encounter with Our Lord Jesus Christ.“.

So given you appear to be proclaiming The Lord, some hope still exists that you’ll find favour with my suggestion which follows.The following proposal provides you with a very real option and opportunity to have a fresh encounter with Christ, and with all due respect, I would ask you to consider it carefully. Therefore, please find itemised below, a suggested agenda for a meeting of minds. All agenda items are backed up fully with appropriate supportive material and in principle hard copy material can be distributed well in advance of any agreed meeting.

Having already communicated with you with respect to one Mario, I will now move to another. On Saturday morning, I had a brief encounter with your parish priest Mario Tong for the first time in the cathedral. Mario kindly told me that you were in England this weekend for the Gibraltar celebration event, and that he, like you, comes from Malta too. As a consequence of our brief friendly discussion, I did a little bit of background reading upon him, and noted well his adopted mantra, when he first became appointed to his position in Gibraltar. He said that he wants to listen, serve and help, and so perhaps with respect, might I suggest that Mario could be used in a listening role to me; a  serving role to Christ in His Second Coming in order to help further explore and develop this proposal of mine to hopefully enable your brothers and sisters in Christ to have a close encounter of a spiritual kind with Christ at some point in the fullness of time.

Also, in principle, if preferred, I personally would have no objection to holding a meeting with you, alongside other prominent Christian church leaders in Gibraltar, perhaps as your special invitees. I have informally met several church leaders already.

Finally, if you’re wondering why I’ve entitled this letter “From Speke to Malta”, it’s simply because Professor Walter Veith’s “From Crete To Malta” series notwithstanding, Speke (of John Lennon Airport fame) is  my nearest equivalent to your Gudja, located as it is, near to Liverpool, which as I mentioned in my last letter, is to all intents and purposes, Ireland’s capital city.

I look forward to receiving a positive reply.

Agenda for a Meeting

Christ in His Second Coming

Carmel Zammit, Tony Farrell, Others to be discussed

1.Introductions – from Speke to Malta;

2. The Sheffield connection of Christ in His Second Coming explained;

On The Way to Emmaus Again

The Queen of Heaven

The Book of Teia Tephi in The King of kings’ Bible

6. Britannia – The Queen of Gibraltar explained;

The Story of Tephi in Brief

7. The True Identity of The British People explained;

The Heraldic Symbolism of The British Coat of Arms

Stonehenge; the Aubrey Circuit, and The Sabbatical Law and Calendar

8. Relevant Prophecies concerning The Second Coming of Christ and The Last Pope;

His Rock of Defence

10. The Way home or face The Fire explained;

10. Date and Time of Meeting with Christ in His Second Coming 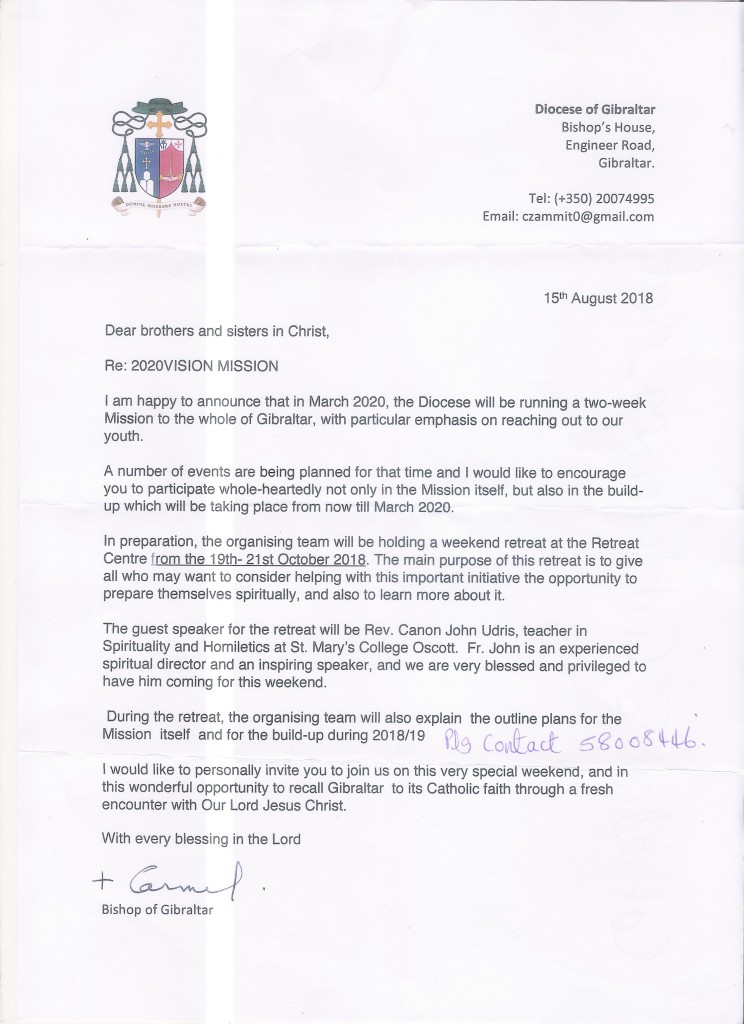